Mythology Distillery & Station 26 Brewing are back with another special release for you all – Hell Bear American Whiskey finished in Station 26 Imperial Stout Barrels!

As you may know, Station 26 and Mythology have a long, unrivaled history of creative collaborations featuring lots of barrel-aged goodness. Station 26 has been barrel aging beers using Mythology’s Whiskey, Rum, and Brandy barrels in recent years, while Mythology had been in the works with a special beer-featured release. 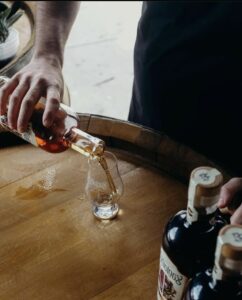 Particularly, the “Hell Bear” or “Eternal Depths” Imperial Stout collaboration propagated this beer-featured whiskey release. We gave Station 26 a whiskey barrel that held our Hell Bear American Whiskey. They used this barrel to age an Imperial Stout, then they gave that barrel back to us to age whiskey in a second time.

5 months later, we’ve harvested the batch and the rich, chocolatey notes the Stout left behind are delicious. With an aroma of cocoa and toasted oak, transitioning to a palate of roasted malt and caramel, and finishing with sweet vanilla cream and slight char; this unique collaboration is a must try. 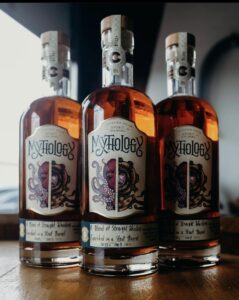 This limited release barrel will only be available for purchase at our tasting room location in the Highlands neighborhood of Denver Colorado. The Station 26 barrel-aged Imperial Stout release will be available at their brewery and select accounts.

We hope you get to try these one-of-a-kind releases! Cheers.